Camellias and the Fallen Woman: La Traviata and Coco Chanel

A woman’s virtue is a pretty transcendental theme in opera. A woman either has virtue, someone is trying to take it from her, or she’s lost it altogether. When I went to see La Traviata, the woman in question had lost her virtue. Completely. And a long time ago. In proper terms, Violetta was a courtesan and when she fell in love with a young, inexperienced, rich gentleman from Paris, it is needless to say that her virtue became a huge topic of controversy for his family. Throughout the opera the choices she had made in her past colored the future before her and, as you can imagine, the outcome was tragic. 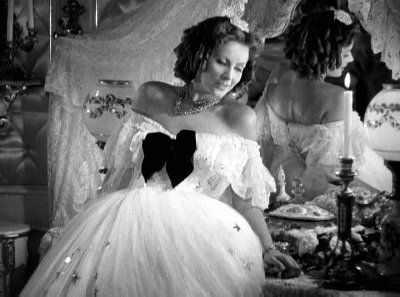 La traviata (the fallen woman) was inspired by “The Lady of the Camellias” written by Alexandre Dumas and the story has been adapted into over 16 incarnations including Camille starring Greta Garbo (above).

Throughout Traviata, the  camellia, Violetta’s favorite flower,  becomes a symbol for the fragility of her life (she is dying of tuberculosis) and the purity of her virtue (despite her circumstance). And while watching the show, I was reminded of another controversial woman whose love for the camellia became a historical symbol for her own fashion and the empire she created: Coco Chanel.

Coco Chanel, queen on 20th century fashion, was a courtesan herself in the early part of her career and “Boy” Capel, a British Captain, was not only her lover but helped her while she opened her first two shops in Paris (he was the sole financial backer). Despite his infidelity and his marriage to an English aristocrat, their affair only ended when he died in a car accident some nine years after they met. Talk about untraditional romance. Coco makes Violetta look like a saint.

But, like Violetta, one of the signature symbols of Chanel is the camellia, still found on pins and in the house’s jewelry collection.

Does liking camellias make you a slut or what?

HGO made the camellia itself, not Violetta, the “brand” for the show: a simple red background with a large white, marbled camellia and I am intrigued by the choice. To be honest, pleasantly surprised that there isn’t a bodice-ripping photo reminding the world of the over dramatics of opera.

I have mixed feelings about the show itself but one thing is certain: Albina Shagimuratova was phenomenal as Violetta. Her vocal control was amazing (singing laying down, draped on a stair) and  you could cut the air with her enunciation which was used as a part of her characterization not merely for clarity of word. Her vocal velocity was countered by a supreme gentle confidence on stage which made you believe she was a real human being instead of simply a prima donna. She was the Violetta I had imagined when I listened to cassette tapes in my bedroom when I was 15. Thank you, thank you, thank you.

Other parts of the show I had a hard time with but Albina made the three-hour Sunday afternoon performance well worth it.

But this brings me back to my camellia.

I have never been keen on roses. I think that the one year in high school when I had two boys give me a dozen red roses for Valentine’s Day indicated I should probably diversify the floral repertoire. And I have been lucky to have never received those red flowers that scream – I screwed up so I picked up something at Walgreen’s. I have received peach roses, yellow roses, purple roses, white roses, coral roses, tulips, peonies, and orchids but somehow I never get the red ones. (It probably has something to do with the fact that I indicate early on that I don’t like them.)

But I am going to pose a question to you: with Valentine’s Day coming up and the floral market about to go crazy (Men – please order 1 – 2 weeks ahead to ensure quality flowers that arrive on-time.) What kind of flowers to do you want? What epitomizes who you are?  Perhaps red roses the classic indicator of romance and love or maybe Coco and Violetta’s white camellia, promising secret, forbidden passion.

Either way, I think Coco and Violetta would say — It’s one night a year, ladies, — get your courtesan on!

One thought on “ Camellias and the Fallen Woman: La Traviata and Coco Chanel ”