Moby Dick by Herman Melville, is a classic American novel which has bored students for generations with its encyclopedic recitation of whaling history and a plot that goes, seemingly nowhere. My English teacher in high school wrote her masters thesis on this text and so we spent a semester studying it. Yes, a semester. My greatest memory is that KR and I choreographed an extra credit project, chronicling the “plight of the whalers’ wives.” My next greatest memory of this book is that no matter what I thought, my interpretation of the text was wrong, so said Anna Thorpe.

Later, I began to have a better appreciation for the white whale as I studied existentialism in school. It was there that I realized that the book is not about the plot, per se, but how, as Sartre would later say, we become who we are by what we do and each of the major characters in MB demonstrates this. From Sturbuck’s appeals for the health of his crew and Pip’s tambourine and it’s reminder of the excitement of the seas to Greenhorn and his longing to understand the unknown and Queequeg’s reconciliation with nature, Melville delivers a cast of characters who we could quite easily become.   In short, if you are looking for a philosophy of ethics but not a lot of action, this is your novel.

Which is why I thought it was weird that the Dallas Opera commissioned a two-act opera on Moby Dick. Most successful operas focus on high drama, action that can be easily transferred on stage and a love interest – none of which are found in Melville’s tale of Ahab’s quest for Moby Dick, the white whale who took his leg and, in Ahab’s madness, the nemesis that would take the lives of him and his crew.

So, aside from it’s bad reputation as a snoozer of a book, this opera concept has a few hurdles to overcome: a plot where not a lot happens (yep, we’re looking for a whale here), no one really goes anywhere (they are all stuck on a ship together), and a subject matter that is pretty offensive (we don’t like to think about killing whales, do we?) How is a composer, librettist, and set designer going to overcome the obstacles?

These are the thoughts in my mind as I watched San Francisco Opera’s production of Moby Dick  as televised on PBS Great Performances. I knew it was either going to be awesome or horrible. 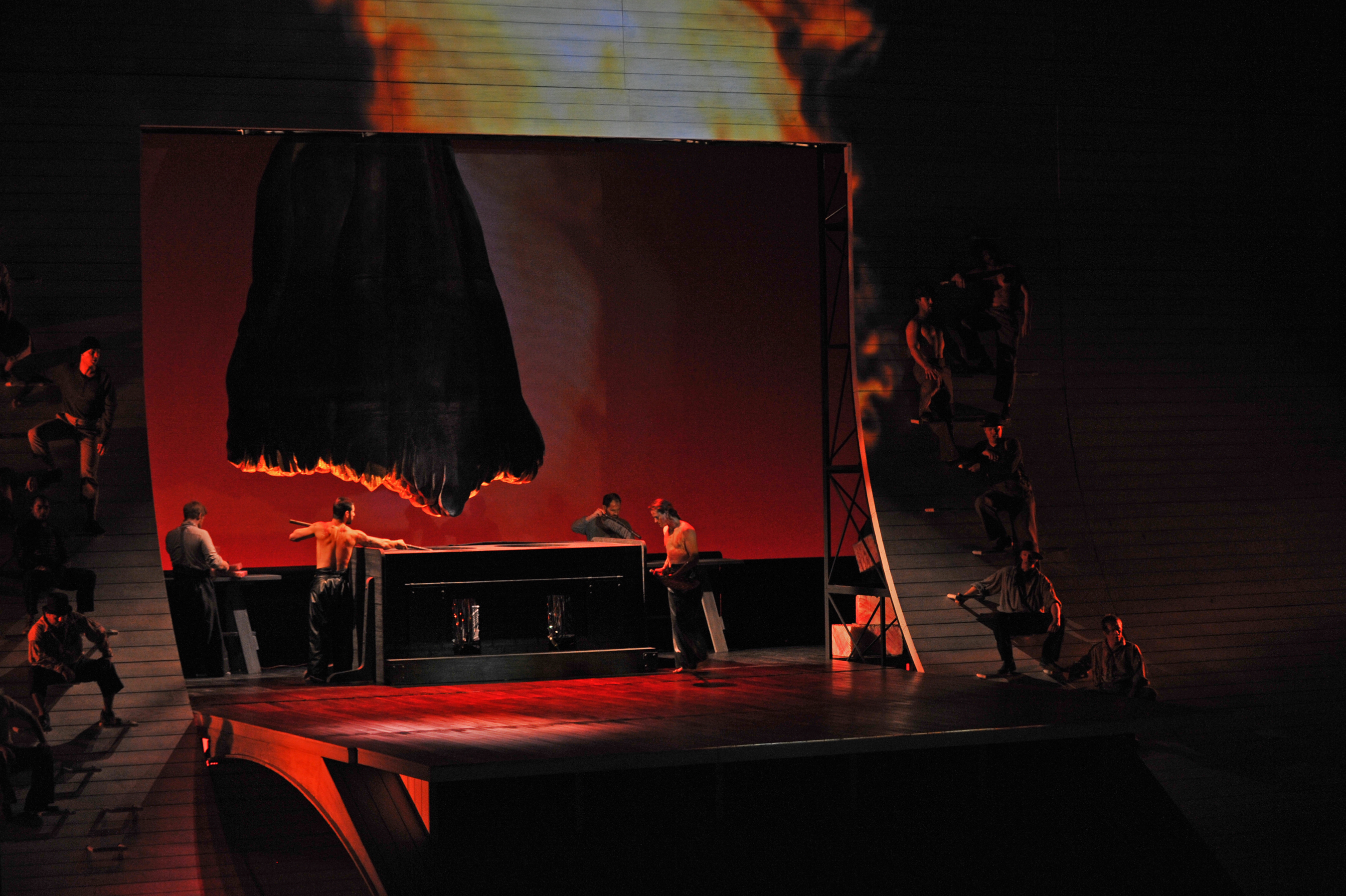 I am not a fan of killing whales, are you? But the truth is that much of New England’s economy was based on the whaling industry and Melville’s novel chronicles this. However, in order to keep folks connected to the characters, not the dead whales, images of the whales are limited. But when they are shown (during the scene when they are cleaning a dead whale) the huge whale “steaks” are horrible, which seems to cast judgment on the activity itself. It is during this scene that we see a whale tail but there are no other whale images in the opera. To not include some details of whaling would do a disservice to the plot and the novel but the decision to limit the imagery allowed the audience to focus on character development not the ethical quandary of whaling, itself.

No one is going anywhere

Logistics are problematic for an opera set on the high seas. As audience members we can’t just look at a ship set for 2.5+ hours. Understanding this Robert Brill, Set Designer, used two primary tools to transform the stage. First, he used a curved backdrop with rock climbing pegs so singers could move up and down the wall. This created the illusion that the ship was much longer that the depth of the stage and the crew moved both horizontally and vertically through the ship. Secondly, instead of physical set changes, computer graphics generated set graphics, turning the ship into row boats for example, tumultuous rain and sea storms, and beautiful nautical navigation maps interconnected with beaming constellations.

But even more impressive than the set design was the intersection between Melville’s text, the libretto and the music. Constantly flexing between tonal and atonal melodies, the score juxtaposes the benevolence and malevolence of the ocean, at times sounding like a lullaby and an eminent threat, simultaneously. The libretto does justice to the original text – an ode to the psychology of obsession and the nature of human existence. In fact, the entirety of this opera can almost be summarized by these few lines sung about their quest from the point of view of several characters:  “Is this madness – a vision – a choice? Is this surrender?” In short, how will each of these people change because of their experience on Ahab’s ship?

And that is why I loved this opera so much. I really grow bored with the fretting female sopranos who are longing for love lost all the time. Unfortunately, contemporary opera has inherited a misogynistic canon of predictable operas. And though I can watch La Boheme a zillion times, it is nice to see something that has some depth, that is a little challenging and that speaks more directly to the time we are in. For although Moby Dick is set in an America over 100 years ago, aren’t we all still forced on quests that we cannot control, required to make the best decisions in less than desirable circumstances? And, more importantly, forced to live on a ship with people we didn’t choose but who we must get along and complete a task with?

You can watch the opera in its entirety here.

Libretto: Gene Scheer, who is currently working on an opera adaptation for “Cold Mountain” for Santa Fe Opera.