Are the voices in your head demons or angels: The Devil Inside 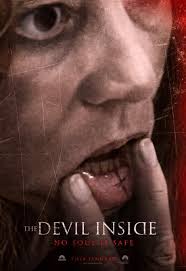 Many people adore  horror movies. The gorier, freakier, demonic the better. This is not necessarily my movie preference, which is overly intellectual and obtuse but I went to see “The Devil Inside” this weekend anyway.

This is a movie about demonic possession, the role of the Holy Roman Catholic Church, cover-ups, and, let’s not forget, it’s based on a true story.

Of course, it is.

But those things, notwithstanding, it actually wasn’t bad which makes me wonder — why are we still interested in this same movie? The Exorcist, The Exorcism of Emily Rose, etc. It’s the same movie, right? Same problems, same conclusions, which is, of course, a non conclusion. Is there something in these movies that we are still needing to learn?

In all of these movies, demonic possession mirrors many of the symptoms of what 20th century psychiatry would label mental illness. Psychotic breaks can include hearing voices, speaking in tongues. Schizophrenia can cause people to believe that they are in an entirely different world altogether (like hell, for example). Bipolar can cause people to learn huge amounts of information in short spans of time (like multiple languages). Depression can cause self-mutilation to the point of death (like starvation and cutting). Our solution to the suffering caused by mental illness is medication and therapy.

In other cultures, these traits indicate that God(s) have touched certain people and given them the power to know the future. These people run communities and civilizations.

In our culture, we have a paradoxical view of mental illness because  they represent some of the most  prolific and influential thinkers of our cultural history (Beethoven, Alvin Ailey, Gustav Mahler, Vincent Van Gogh, Edgar Allen Poe, Virginia Woolfe, Mark Twain, and the list goes on) while others are simply locked away forever.

For the Church. however, many people with mental illness symptoms (at least those traits considered demonic) represent the “hosts” of the fallen children of God, those who seek to avenge the love and grace of Jesus Christ by inflicting pain and confusion on the pious.  They are to be prayed for and they are (to an extent) be exorcised. Psychiatry cannot help them.

Me? I, personally, believe that as organisms, our brains mutate. There are glitches. If we  know that we only use a small portion of our brain’s potential, then the possibility that the impossible might happen in singular occurrences seems, well, possible.

Perhaps we can all agree that the tucked away portion of our  brain might, indeed,  contain the voices of angels or demons and that should we stumble upon it in our lifetime, we should hope we have the strength to create music not sorrow.

Here is a piece of music I am continually trying to figure out – devil or angel:

4 thoughts on “ Are the voices in your head demons or angels: The Devil Inside ”