Should he analyze us or should we analyze him? Michael Fassbender in “Shame” and “A Dangerous Method”

I admit that this time of year I am ready to don my black beret – but not because the weather in Houston is frigid.  I pull it out of my tidy closet basket in order to feel like a true cinema-snob. Yes, folks — it’s Oscar season and though the nominations aren’t out yet, I have already started my race to see the major movies.

Over the holiday I watched several (ahem, 5) movies and felt like I was stalking Michael Fassbender. He seems be a big contender for some kind of Oscar recognition this year, playing in two divergent, yet similar roles in “Shame” and “A Dangerous Method.”

Similar, you say? How could one movie about a yuppie nymphomaniac (“Shame”) be in any way related to a movie about Carl Jung and Sigmund Freud (“A Dangerous Method”)?

Well, obviously, they are about the (non) analysis of the self but perhaps that is too deep for this early in the post so let me give you a brief summary of the two (no spoilers!)

In “Shame” we find Fassbender as a seemingly, typical Manhattan late 30-something male – good job, austere lifestyle and an uncanny ability to match scarves and sweaters  with relative ease (and without the help of a girl). What is revealed is that he has a true sex addiction. Now, ladies, I don’t know about you but for the past 15+ years I have listened to men tell me “uh, yeah, baby, I don’t know if you can handle me, I am a total nymphomaniac… yeah, I think about doing it all the time.” For those dudes out there that think that nymphomania is studly or a good pick-up line, please watch this movie. “Shame” does its job in fully contextualizing Fassbender’s addition from the workplace to the sex clubs. It is eye-opening.

Next, “A Dangerous Method” finds Fassbender as the seemingly straight-laced Carl Jung, student of Freud and famous for the archetypes you had to identify in college literature class.  Through his treatment of one patient (played horribly by Keira Knightly — don’t get me started) we see how the student/mentor relationship between Freud and Jung evolves and ultimately splits the theory and practice of modern psychology.

In both “Shame” and “A Dangerous Method” Fassbender plays men who have a conventional appearance but whose interior life is darker and uncontrollable.

And so I think the concurrent release of both of these movies and Fassbender’s incredible portrayal of both characters begs the question — who should be  analyzed and who should be doing the analysis?

I am certain that psychiatric and psychological treatment would have helped Fassbender’s character in “Shame.” But what is interesting is that though his condition caused him to act  irrationally, he could see with such clarity the equally disturbing situation of his sister.

Similarly, as Jung strives to develop a psychological methodology that allows people to question what they want to accomplish and how to get there, he never made decisions to ensure his own romantic and domestic happiness.

Are these guys hypocrites, or what? How can it be that , as people, we can be both rational problem solvers, and embedded emotional messes?

The answer that everyone gives me is “Joy, you’re just too close to the problem” or “you’re too emotionally attached to the situation.” Usually both of these things are true but I find that even when I am helping someone I love with a problem (someone I am very close with) I can be equally objective so that doesn’t seem to ring true to me either.

When someone tells me the story of her life or current situation, a simplified narrative unfolds and no matter what flourishes or fancies are added, a skeleton of the truth is revealed. What does this mean? As the listener, less data allows me to articulate a cleaner solution.

However, when confronted with all my own personal information – the history, emotions, situations, guilts, hapinesses, etc that I carry in my head, it is nearly impossible to organize it in any sort of reasonable manner. It is data overload, to say the least.  It’s the jumble that makes me, sometimes, into an embedded emotional mess that has no idea what to do.

But the thing that helps, the one way that we can begin to feel relief from our own additions, sadnesses, guilts, etc is to have the courage to tell someone else our story. By taking the jumble in our head and forming it into words and sentences and thoughts we begin to show ourselves and others the data needed for us to begin find our way out. 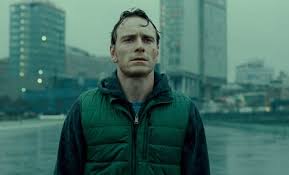 And so, even though Carl Jung had his own problems, by seeing him, his patients looked at their own life and told their own story. Perhaps Fassbender’s character in “Shame” – a man so devoid of words – could have survived his secret more easily had he spoken the shameful and ugly truth of who he was on the inside.

But I believe that the shame and secrets we carry as utterances in our head, once articulated, are never as destructive.

And so, sometimes, we do not need to analyze someone else’s problems. We do not need to be an expert. Sometimes we need to simply give them the opportunity to utter the words that become their own story and solution. More importantly, sometimes we need to have the courage to put all of our irrational thoughts into words and ask someone we love to listen so we can make sense of it, ourselves.

One thought on “ Should he analyze us or should we analyze him? Michael Fassbender in “Shame” and “A Dangerous Method” ”